Gasification is the conversion by partial oxidation (i.e. more oxidizing agent than for pyrolysis but less than for complete combustion) at elevated temperature of a carbonaceous feedstock such as biomass or coal into a gaseous energy carrier. Gasification takes place in two main stages. First, the biomass is partially burned to form producer gas and charcoal. In the second stage, the carbon dioxide and water produced in the first stage are chemically reduced by the charcoal, forming carbon monoxide and hydrogen. Gasification requires temperatures of around 800°C or more to minimize the residues of tars and high hydrocarbons in the product gas. This gas, commonly called “producer gas”, contains hydrogen (18–20%), carbon monoxide (18–20%), carbon dioxide (8-10%) , methane (2-3%), trace amounts of higher hydrocarbons such as ethane and ethene, water, nitrogen (if air is used as the oxidising agent) and various contaminants such as small char particles, ash, tars and oils.

The partial oxidation can be carried out using air, oxygen, steam or a mixture of these. Air gasification produces a low heating value gas (4-7 MJ/Nm3 higher heating value) suitable for boiler, engine and turbine operation but not for pipeline transportation due to its low energy density. Oxygen gasification produces a medium heating value gas (10-18 MJ/Nm3 higher heating value) suitable for limited pipeline distribution and as synthesis gas for conversion, for example, to methanol and gasoline. Such a medium heating value gas can also be produced by pyrolytic or steam gasification. Gasification with air is the more widely used technology since there is not the cost or hazard of oxygen production and usage, nor the complexity and cost of multiple reactors. With air gasification, the cold gas efficiency, describing the heating value of the gas stream in relation to that of the biomass stream, is in the order of 55 to 85%, typically 70%.

Technology platforms
Three categories of gasifiers can be distinguished:

The fixed bed gasifiers are mostly small scale and come in two types, either down-draft (<2 MW) or up-draft (<10 MW). They differ in the direction of gas flow through the biomass in the reactor. In the up-draft gasifiers the raw gas contains important fractions of tar (typically 10-20 g/m3) which need to be removed before using the gas, in particular for engine operation. The down-draft reactor enables the cracking of the high hydrocarbon fraction (resulting in tar content sometimes below 0.1 g/m3) but a drawback is the high gas temperature at the outlet.
To top 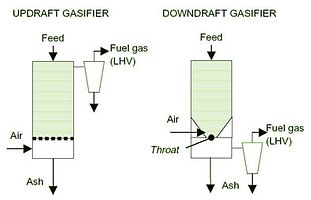 The fluidised bed gasifiers, either stationary, SFB, or circulating, CFB, are in the MW-range. The circulating variety, CFB, requires a size of more than 15 MW to be commercially viable. The product gas is characterized by low tar content (typically about 0.01 g/m3) and also sulphur and chloride may be absorbed in the bed material. Thus, fluidised bed gasifiers apparently reduce significantly the problems associated with the utilization of agricultural biomass. 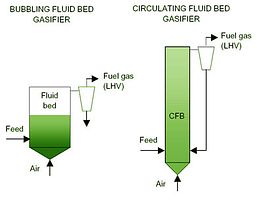 Entrained flow gasifiers operate at very high temperatures, 1200 to 2000°C and require biomass in form of very finely ground particles. Again there are a number of different types. Because of the high temperature, gas is entirely tar free. The removal and handling of the molten ashes is proven technology, however from practice it seems only affordable in very large equipment.

The efficient removal of tar still remains the main technical barrier for the successful commercialisation of biomass gasification technologies. Different approaches can be considered for reducing the tar content of the product gas. A rough distinction can be made between physical, thermal and catalytic procedures.

The experience of one hundred and fifty years in cleaning tars from biomass gas is not convincing. Physical separation methods are unreliable and produce primarily waste streams that are environmentally unsafe. Entrained flow gasifiers produce a tar free gas. However, those systems are only feasible at very large scale. Those large scales are compatible with chemical synthesis processes, but less with biomass based power generation. Entrained flow gasifiers are proven technology for gas, oil and coal, but they are not used for direct solid biomass injection. With respect to tar free operation downdraft gasifiers are load inflexible and difficult to scale up. Catalytic systems are being demonstrated. However, demonstration systems experience technical problems and show large construction time overruns.

Products of gasification can be used for heat and power generation, separately or in CHP applications, as well as for the production of chemicals and transportation fuels. The producer gas is mostly intended for immediate use on site and the gasification unit is an integral part of the heat or power generating plant. In the small unit size, the gas is mostly used in a combustion engine and in the larger units in a gas turbine or combine cycle plant. The various gasification applications for power and or heat are shown in the figure below, in terms of their market potential and overall technology reliability.

Status of applications for market potential and technology reliability

Firing in boilers or heat applications

Firing the raw gas in boilers or heat applications such as kilns after removal of dust and particulates is the simplest application since the gas is kept hot and the tar problem is avoided. This market is one where all types of gasifiers can compete. For these applications, a low tar content is not essential if the wall temperature of the gas pipe system can be maintained above the level where tars condense.

Gas turbines operate with at very high temperatures, up to 850°C. Some of the compounds formed from ash forming elements in the biomass exit the gasifier in a gaseous or liquid state. Also, a t low concentrations of such compounds in the hot gas entering the turbine, severe deposition and corrosion (for instance on turbine blades) can be expected. Possible solutions to this problem include operation of the gas turbine at low inlet temperature, gas cleaning for removal of the troublesome compounds or gasification under conditions where the formation of these compounds is minimized.

Co-firing application are perhaps the most interesting at present for an accelerated market penetration potential as the overall costs are relatively low due to the existence of the power cycle in the coal fired power plant. In addition, co-firing has the advantage over co-combustion, where the biomass fuels are mixed with coal before or during the combustion process, that the biomass residual ash is not mixed with the coal ash, which has an existing market as a construction material. Also the technical risks are low as the gas is utilised hot and therefore there is no tar problem. In reburning applications, (when the fuel gas in introduced almost at the top of the coal boiler) it has been shown that the environmental performance of the power station is significantly improved in addition to the replacement of fossil fuels by renewable biomass fuels.

As with coal, fuel gas produced by biomass gasification can be co-fired with natural gas either directly in turbines, boilers or duct burners or as reburning fuel. This could significantly enlarge the market options for biomass gasification. Calculations show a substantial increase in flame temperature and lower heating value by adding 25% methane to gasifier fuel gas.

For engine operation, the dust content in the gas should be as low as possible. Spark ignition engines can be operated on 100% producer gas. Compression engines (diesel engines) require at least 10-20% diesel oil to bring about ignition of the gas. In both cases a down-rating of the engine should be expected. A spark ignition engine designed for gasoline will loose about 45% of the power, a diesel engine about 30%.

Work for running engines with producer gas has been continuing for decades now but with few breakthroughs if any. The main problem relates to efficient removal of tar, however, the engine manufacturers have not been able to design and construct more robust engines, which can tolerate some tar in the gas.

This is an area which presents a dilemma for the gasification community since the gas turbine manufacturers do not wish to develop more robust engines that could operate with some contamination in the gas as the market is still considered very small. Thus the main task falls on the gasification industry to deliver a “clean” gas to the combustion chamber of the gas turbine. On the other hand this has prompted the gasification industry to develop gas cleaning technologies which, if proven reliable, will form the basis for synthesis gas from biomass.

These chemicals as well as energy vectors can be used in several applications or can be further upgraded into other useful products. They can all be produced via synthesis gas (CO + H2) that has been the subject of extensive investigations and commercial industrial processes based on fossil based synthesis gas exist. The advantage of these vectors is that they can be either used in fuel cells for electricity or transport applications, or alternatively, they can be processed to liquid transport fuel additives such as dimethylether (DME).

The penetration of gasification technologies in the energy markets has been slow and major R&D efforts are still needed. The R&D needs for gasification technologies extend over several issues. The economic and efficient removal of tar for small-scale systems remain a serious barrier for wider market penetration, while for large scale systems the reliability of the overall system needs to be convincingly demonstrated for the various technologies that have been proposed and are in the demonstration phase.

Although significant progress has been achieved and new improved technologies are being demonstrated, gasification of biomass remains in the development stage, with rare exceptions. The reasons are its relatively high cost compared to combustion and the low reliability for long-term operation. The possibility to deliver a clean gas, free of particulates and tars, would turn out to be a key progress on the road to a market penetration. Indeed, future market opportunities exist for liquid biofuels production via synthesis gas, however a significant amount of work has still to be done before such plants could be considered by the financial community.