In Sweden, the first three have been practiced since the late 70’s, while the latter is still under testing in Sweden, although in Finland it is now an established method. The most predominant supply chain over the last 20 years in Sweden is roadside chipping, covering approximately 40% in the early 90’s to about 75-80% nowadays. Regarding consumption, most marketed forest chips in Sweden was consumed in district heating plants, where it constituted the major share of wood fuels in the 80’s. 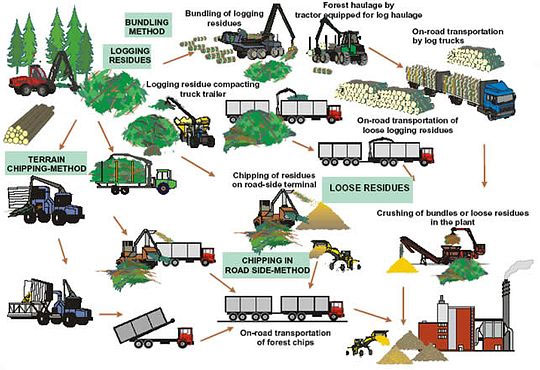 Terrain chipping
Comminution in the terrain, or at the source, requires a highly mobile chipper suitable for cross-country operations and equipped with a tippable 15–20 m3 chip container. The chipper moves in the terrain on strip roads and transfers the biomass with its grapple loader to the feeder of the chipping device. The load is hauled to the road side and tipped into a truck container, which may be on the ground or on a truck trailer. Large landing areas are not required, but a level and firm site is necessary for the truck containers. When large volumes of forest fuels are produced, the terrain chipping system becomes difficult to control. At present, the role of this system is diminishing.

Chipping at a landing (roadside chipping)
Comminution at a landing is the traditional option of forest chip production. The biomass is hauled by forwarders to the landing and bunched into 4 to 5 meter high piles. The forwarder operates independently of the chipper. Comminution is performed at the landing using farm tractor-driven chippers in smaller operations and heavy truck-mounted chippers or crushers in large-scale operations. Landing chippers do not operate off-road and can therefore be heavier, stronger and more efficient than terrain chippers. To avoid the system from “over-heating”, the truck-mounted chipper and chip truck can be replaced by a single chipper truck. This blows the chips directly into a container and then hauls the load to the plant. As the chipper truck is equipped with its own chipping device and crane, load capacity suffers and the operation radius around the plant is reduced. On the other hand, as only one single unit is needed, the chipper truck is suitable for small work sites and for delivering chip to small heating plants.

Chipping at the plant
Comminution at a plant makes the chipper and chip truck independent of each other. The technical and operative availability of the equipment increases, control of the procurement process is facilitated, demand for labor is decreased, and the control of fuel quality is improved. Mobile chippers can be replaced by heavy stationary crushers that are suitable for comminuting all kinds of biomass, including stump and root wood and recycled wood. The larger is the fuel flow, the more obvious become the advantages. Since the investment cost is high, only large plants can afford a stationary crusher.
When comminution is performed at the plant, truck transportation of biomass takes place in the form of loose logging residues, whole trees or pieces of stump and root wood. The low bulk density of the biomass is the weak link in the system. It is therefore necessary to increase the bulk density of residues. A new system was developed, where logging residues are compressed and tied into 70 cm diameter, 3 m long bales or composite residue logs. A bale of green residues weighs 500 kg and has an energy content of about 1 MWh. Bales are transported to the roadside using a conventional forwarder and on to the plant using a conventional timber truck. About 12 bales form one forwarder load, and 65 bales or 30 tons form one truck load.

Terminal chipping
Comminution at a terminal is a compromise between comminution at a landing and at the plant. Biomass is hauled un-comminuted to the terminal for size reduction, and then transported to the plant as chips. If the network of terminals is dense, the distance from the logging site to the terminal remains short. The system does not differ much from the traditional option where comminution is carried out at a landing. A terminal is a tool for controlling the procurement process. Biomass can be stored at the terminal un-comminuted and processed during the winter season when the demand for fuel is high and working conditions at the forest end are difficult. The arrangement makes it possible to apply baling technology for supplying forest chips to small plants that do not have a stationary crusher.

While fossil fuels occur in large deposits and can be produced at a constant cost, forest fuels are scattered and must be collected from a large number of locations. The production costs of these residues depend on many steps within the logistic chain – such as harvesting, comminuting and transport – as well as the scale of operation, the biomass source and the quality requirements placed upon the biomass.

The largest fraction of the procurement costs consist of terrain and road transport. Therefore, the core of forest chip logistics is the control of transportation. Converting the biomass into transportable form with a chipper, crusher or baler also is an essential part of the logistics system.

A significant gap exists between cost of fuel from the early thinnings and that from final cuttings. The gap is caused by the high cost of cutting and bunching of small-sized trees from thinnings, whereas in the other phases of the procurement chain cost differences are modest. If no stumpage is paid, the cost level is 12.8 €/MWh for whole-tree chips and 8.4 €/MWh for logging residue chips.

Factors such as technological progress, up-scaling, refinement of procurement logistics and learning through experience have led to significant reductions in production costs of forest chips in the past decades. However, as the demand is increasing rapidly, the operations have to be extended to more and more difficult stand conditions and distant locations, putting a counter-pressure on the cost of forest chips. 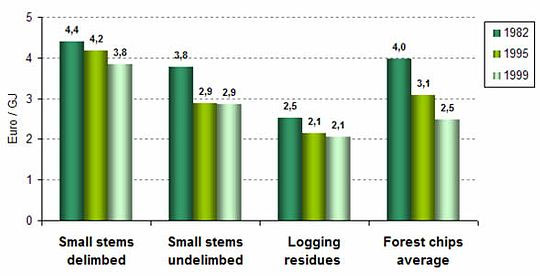 In Finland, the average market price of forest chips decreased in the 1990s, partly because of a shift from whole-tree chips to logging residue chips. The low point was reached in 2000, since then the average price has increased by almost 20 %. This happened despite the development of technology and logistics, as the increasing use of wood fuels forced the production organizations to extend their operations to more difficult and distant stands. Although the prices of wood fuels are increasing in Finland, they are still substantially below the Swedish level. During the third quarter of 2003, the average price of forest chips at a Swedish heating plant was 14.2 €/MWh, VAT excluded, or 39% higher than in Finland. Fossil fuels used for heating are taxed more heavily in Sweden, and therefore the price level is higher. In Finland, the lower prices are explained partly, but not entirely, by lower stumpage prices of biomass, investment aid for production machinery, and production support for small-tree chips.