The mandatory targets for the use of renewable energy in transport has boosted the use of biofuels in the EU reaching 564 PJ in 2012. The NREAPs forecasted a use of biofuels of about 1216 PJ Mtoe in 2020, representing more than 90% of the renewable energy expected to be used in transport.  Today, biofuels are produced largely from food-crops. A recent European Council decision limited the use of conventional biofuels to 7% of the energy use in transport for 2020 (European Council, 2014); the rest should come from 2nd generation lignocellulosic biofuels.

There is great political and media attention now focused on biofuels and the issues related to food security, food prices, effects on biodiversity and perceived CO2 emission advantages over fossil fuels. Provided that farmers and plant operators adopt sustainable energy crop production, thoughtful management & planning as well as sourcing (where available) energy needs for biofuel production from waste plant residues, then there should be no negative environmental effect. On the other hand job creation and the development of rural economies is an important benefit of biofuel production. Furthermore, advanced biofuels are starting to be produced in a profitable manner and more research and technological advances will make them more competitive.

The EC has established a set of sustainability criteria in the Energy and Climate Package, which follows on from the Renewable Energy Roadmap. Articles 17, 18 and 19 of Directive 2009/28 EC forbid the use of lands with high biodiversity, land with high carbon stock, or establish the minimum greenhouse gas savings. These criteria apply since December 2010. Moreover, the EC supports the creation of private volunteer sustainability schemes, essential in order to be counted for the national goals and be qualified to receive government support. Currently the Commission has approved 17. The revision of Directive 2009/28/EC shall increase this criteria and take into consideration the issue of Indirect Land Use Change.

A precise regulatory framework for biofuel development in Europe exists since the beginning of the 1990s. The first measures date from 1992 with a section of the CAP (Common Agricultural Policy) that gave member States the possibility of growing non-food crops on fallow lands and exempting biofuels from taxes in respect of price competition. The principle of each country being assigned production quotas dates back to this same period and it still in use for some of the member States. In 2003, European texts appeared that reinforced the conditions of development of the biofuels sector. The first was the directive 2003/30/CE of 8 May 2003 that targeted promoting the use of biofuels in transportation. In the end of 2007, the European Commission presented its Climate and Energy package which contained Directives 2009/28/EC on Renewable Energies and 2009/30/EC on Fuel Quality. They stablished a 10% goal of renewable energies share in the final consumption in the transport sector by 2020 and the reduction of greenhouse gas intensity in fuels of a 10% by 2020 too.

In February 2006, the Commission released the EU Strategy for Biofuels which contained further specification following on from the Biomass Action Plan (BAP), released in December 2005. The report is based upon a threefold objective: further promotion of biofuels in the EU and in developing countries, preparation for the large-scale use of biofuels, and heightened cooperation with developing countries in the sustainable production of biofuels. In 2009 Fuel Quality and Renewable Energy Directives enter into force, establishing goals and governance system, setting up sustainability criteria, promoting private schemes and defining the rules that might apply the national support for renewables.  Moreover, the EC also proposed a revision of the 2003 Energy Taxation Directive in order to define new rules aim to restructure the way energy products are taxed to remove current imbalances and take into account both their CO2 emissions and energy content. The lack of consensus within the Council has stopped this revision.

Most promising biofuels for transport 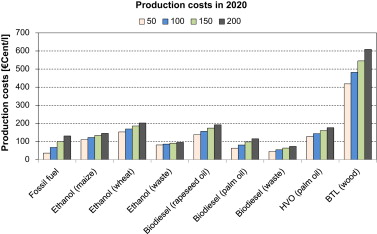