Ethanol or ethyl alcohol is a clear colourless liquid, it is biodegradable, low in toxicity and causes little environmental pollution if spilt. Ethanol burns to produce carbon dioxide and water. Ethanol is a high octane fuel and has replaced lead as an octane enhancer in petrol. By blending ethanol with gasoline we can also oxygenate the fuel mixture so it burns more completely and reduces polluting emissions. Ethanol fuel blends are widely sold in the United States. The most common blend is 10% ethanol and 90% petrol (E10). Vehicle engines require no modifications to run on E10 and vehicle warranties are unaffected also. Only flexible fuel vehicles can run on up to 85% ethanol and 15% petrol blends (E85).

Bioethanol fuel is mainly produced by the sugar fermentation process, although it can also be manufactured by the chemical process of reacting ethylene with steam. The main sources of sugar required to produce ethanol come from fuel or energy crops. These crops are grown specifically for energy use and include corn, maize and wheat crops, waste straw, willow and trees, sawdust, reed canary grass, cord grasses, jerusalem artichoke, miscanthus and sorghum plants.

In Europe, wheat is the main crop grown for bioethanol production – accounting for 0.7% of EU agricultural land and 2% of Europe’s grain supply [Source: ePure]. The EC has proposed to limit biofuel produced from “food crops” at 7% of energy use in transport.  In Brazil, which has the most mature market for fuel ethanol, the mandatory blend level of anhydrous ethanol was increased to 25% in May 2013.

Sugar is required to produce ethanol by fermentation. Plant materials (grain, stems and leaves) are composed mainly of sugars, so in principle almost any plants can serve as feedstock for ethanol manufacture. In practice, the choice of raw material depends on what grows best under the prevailing conditions of climate, landscape and soil composition, as well as on the sugar content and ease of processing of the various plants available. The result is a wide variety of ethanol feedstocks, and hence production processes.

Worldwide, most bioethanol is produced from sugar cane (Brazil), molasses and corn (USA), but other starchy materials such as wheat, barley and rye are also suitable. Crops that contain starch have to be converted to sugars first. A feedstock of around 3 tons of grains is needed for the production of 1 ton of ethanol. In Europe, the main crops for the production of bio-ethanol are starch crops (such as common wheat) and sugar beet. Sugar beet crops are grown in most of the EU-25 countries, and yield substantially more ethanol per hectare than wheat.

At present, R&D activities in the field of bio-ethanol focus on using lignocellulosic or woody materials as a feedstock (see dedicated section). These include short rotation energy crops (for example willow, popular, miscanthus and eucalyptus), agricultural residues (e.g. straw and sugar cane bagasse), forest residues, waste woods, and municipal solid wastes. About 2 – 4 dry tons of woody or grassy material is required for the production of 1 ton of ethanol. With a total sugar content of 60–70% (40% glucose as cellulose and 25% xylose as hemicellulose), wheat straw can produce around 230 kg of ethanol per ton of dry material.

There are several reasons for shifting to ethanol production from lignocellulosic biomass. Lignocellulosic biomass is more abundant and less expensive than food crops, especially when it concerns a waste stream with very little or even negative economic value. Furthermore, it has a higher net energy balance, which makes it more attractive from an environmental point of view.  Indeed, ligno-cellusolic bioethanol has the potential to accrue up to 90% in greenhouse gas savings, well ahead of first generation biofuels.  However, these kinds of biomass are more difficult to convert to sugars due to their relatively inaccessible molecular structure.

The predominant technology for converting biomass to ethanol is fermentation followed by distillation. Fermentation is a bio-chemical conversion process in which the biomass is decomposed using micro- organisms (bacteria or enzymes). This technology can be used for various types of biomass feedstocks.

Practically all ethanol fermentation is still based on Baker’s yeast (Saccharomyces cerevisiae), which requires simple (monomeric) sugars as raw material. Conventional yeast fermentation produces 0.51 kg of ethanol from 1 kg of any the C6 sugars glucose, mannose and sucrose. However, not all feedstocks contain simple sugars. Starch and lignocellulose are polymers, and an hydrolysis is required to break the bonds between monomers and produce simple C6 sugars for fermentation. 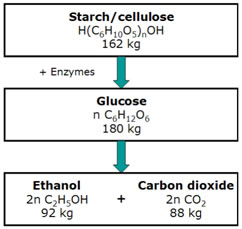 The first step in this conversion process comprises milling or grinding of the grain so as to release its starch. Then this material is diluted in water to adjust the amount of sugar in the mash. This is necessary to maintain the yeast and make the mash easier to stir and handle. Then this mixture is cooked to dissolve all the water-soluble starches. The starch is converted to sugars simultaneously. This can be done by enzymes or acid hydrolysis. In the case of acid hydrolysis, dilute mineral acid is added to the grain slurry prior to cooking. The short carbohydrates resulting from these processing steps can be fermented by micro-organisms. For growing of the yeast needed for the fermentation process, the solution must be slightly acid, namely a pH between 4.8 and 5.0. During fermentation, ethanol is produced, which is diluted with water. This process also results in the formation of CO2. Through a series of distillation and dehydration steps, the ethanol concentration can be increased.

The conversion process of lignocellulosic biomass to ethanol only differs from the process described above with respect to the break down, or hydrolysis, of the raw material to fermentable sugar. This hydrolysis process is more difficult than the hydrolysis of starch. Lignocellulosic biomass contains carbohydrate polymers called cellulose (40-60% of dry weight) and hemicellulose (20-40% of dry weight) that can be converted to sugars. Cellulose is composed of glucose molecules bonded together in long chains that form a crystalline structure. Hemicellulose consists of a mixture of polymers made up from xylose, mannose, galactose, or arabinose. It is much less stable than cellulose. Both materials are not soluble in water. The remaining fraction, a complex aromatic polymer called lignin (10-25% of dry weight) cannot be fermented because it is resistant to biological degradation. This material can be utilised for the production of electricity and/or heat.

For fuel applications, the purity of the ethanol must be almost 100%. This means that the water content must be much lower compared to ethanol produced by current industrial technology. For the dehydration of ethanol several technologies are available, such as the use of molecular sieves and membrane separation, which can still be improved. The power and heat production from the non-fermentable fraction of the biomass and the overall process integration can also be developed further, which will lead to an increase of the energetic efficiency and economic performance of the process.

Bioethanol has much lower energy content than gasoline (about two-third of the energy content of the latter on a volume base). This means that, for mobility applications, for a given tank volume, the range of the vehicle is reduced in the same proportion.

The octane number of ethanol is higher than that for petrol; hence ethanol has better antiknock characteristics. This better quality of the fuel can be exploited if the compression ratio of the engine is adjusted accordingly. This increases the fuel efficiency of the engine. The oxygen content of ethanol also leads to a higher efficiency, which results in a cleaner combustion process at relatively low temperatures.

The Reid vapour pressure, a measure for the volatility of a fuel, is very low for ethanol. This indicates a slow evaporation, which has the advantage that the concentration of evaporative emissions in the air remains relatively low. This reduces the risk of explosions. However, the low vapour pressure of ethanol, together with its single boiling point, is disadvantageous with regard to engine start at low ambient temperatures. Without aids, engines using ethanol cannot be started at temperatures below 20ºC. Cold start difficulties are the most important problem with regard to the application of alcohols as automotive fuels.

Ethanol can be used :

Ethanol is best used in spark-ignition engines because of its high octane rating. Due to its poor ignition quality (low cetane number), it is less suitable for diesel engines.

It is generally impractical to use neat ethanol in spark-ignition engines due to its low vapour pressure and high latent heat of vaporisation which make cold start problematic. The most cost-effective aid is the blending of ethanol with a small proportion of a volatile fuel such as gasoline. Thus, various mixture of bioethanol with gasoline or diesel fuels have been used. The most well-known blends are (by volume):

Bioethanol has been extensively tested in light duty flexible fuel vehicles (FFV) as E85G. ETBE is also used in blends of 10-15 % with gasoline to enhance its octane rating and reduce emissions. Blends of gasoline with up to 22% ethanol (E22G) can be used in spark ignition engines without any material or operating problems. Blends of diesel with up to 15% ethanol (E22D) do not introduce any technical engine problem and require no ignition improver.