Anaerobic digestion (AD) means the bacterial breakdown of organic materials in the absence of oxygen. This biochemical process produces a gas, called biogas.

The European Union has commited itself to an average reduction of GHG emissions of 20% by 2020 and 40% by 2030 relative to 1990. Agriculture is currently projected to obtain a 17% by 2020 reduction in GHG emissions, partly due to decreasing use of fertilizers and increasing productivity. The agricultural sector is responsible for more than 40% of anthropogenic methane emissions and more than 50% of nitrous oxide emissions. The main sources of methane are enteric fermentation and manure management, while nitrous oxide is mainly derived from the turnover of nitrogen in fertilizers, manure and crop residues, and indirectly from the turnover of nitrogen lost to the environment via ammonia volatilization or nitrate leaching. Both methane and nitrous oxide are potent greenhouse gases with global warming potentials (for a 100-year time horizon) that are, respectively, 21 and 310 times greater than that of CO2. Significant reductions in GHG emissions are therefore possible if methane and nitrous oxide emissions can be reduced via improved management practices. 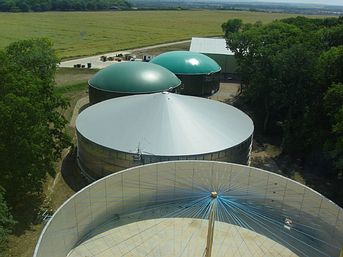 Anaerobic digestion (AD) provides possibilities to produce renewable energy from organic wastes in decentralized sites, producing a methane rich biogas from manure (human and animal) and crop residues. Apart from supplying renewable energy AD plants have other positive effects including the strengthening of closed loop recycling management systems, reducing emissions from manure storage and producing a valuable organic fertilizer. It can also create new sources of income for farmers. Currently less then one percent of the potential benefits from AD are being used. Reasons for this include the obstacles such as the legislative framework and the lack of economic incentives for potential investors. Countries like Denmark, Germany, Austria and Sweden promote effective mechanisms to produce biogas from organic wastes by political measurements.

In the process of anaerobic digestion, as mentioned above, the bacterial breakdown of organic materials in the absence of oxygen produces biogas, and the process occurs in the following four steps: 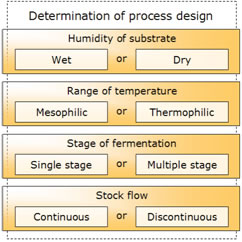 A biogas plant involves more than just a gas tight manure pit or a digestion vessel, it is usually built up of four elements: 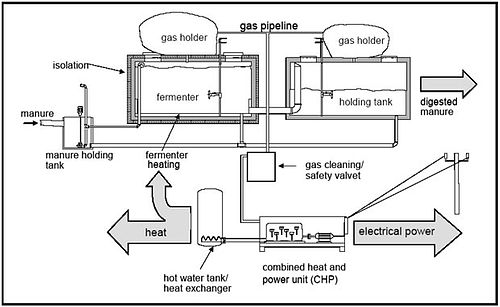 The mode of feeding can be continuous or discontinuous. In discontinuous batch systems the fresh substrate is fed together with an inoculum of digested material into a reaction vessel. During one or two days the material is aerated in order to increase the temperature. During the following two or three weeks the substrate is anaerobically degraded, at first with an increasing daily gas production. After having reached a maximum after approximately 10 to 14 days, gas production decreases again to reach a plateau of about half maximum production. To compensate the unsteady gas formation three to four batch digesters are operated parallel but filled at different times. Batch systems till now are not very common for agricultural biogas plants. Another form of discontinuous process design are storage systems. They combine fermenter and holding tank in one tank. The combined fermentation and holding tank is slowly filled with fresh manure depending on the produced amount. The advantage of this system is the low costs. Problems arise from high heat losses and unsteady gas formation rates.

Usually, the produced biogas must be dried and drained for condense water and biological or chemical cleaned for H2S, NH3 and trace elements. Further upgrading steps to increase the CH4 content, membrane separation of CO2 and pressurising the biogas can be taken depending on the utilisation purpose.

Energy input in various handling and transportation operations for bringing different raw materials to the biogas plant and for transportation of digested residues, and the biogas yield from various biomass resources. Values within parentheses indicate interval found in the literature.

Biogas can contribute substantially to the sustainable energy recovery from agriculture and the organic fraction of wastes. The amount of agricultural and municipal organic wastes currently available for energy production is very large. The EU energy policy provides the basis for a much broader future application of biogas from anaerobic digestion.