Cogeneration is the combined production of electrical (or mechanical) and useful thermal energy from the same primary energy source. It encompasses a range of technologies, but always includes an electricity generator and a heat recovery system. Cogeneration is also known as combined heat and power (CHP).

The principle behind cogeneration is simple. Conventional power generation, on average, is only 35% efficient – up to 65% of the energy potential is released as waste heat. More recent combined cycle generation can improve this to 55%, excluding losses for the transmission and distribution of electricity. Through the utilisation of the heat, the efficiency of cogeneration plant can reach 90% or more. 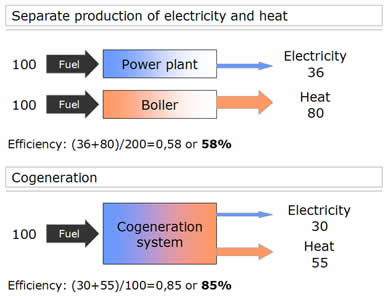 Cogeneration installations are usually sited as near as possible to the place where the heat is consumed and, ideally, are built to a size to meet the heat demand. Otherwise an additional boiler will be necessary, and the environmental advantages will be partly hindered. This is the central and most fundamental principle cogeneration. In that context, the benefits of cogeneration are:

Increased efficiency of energy conversion and use, and thus large cost savings, providing additional competitiveness for industrial and commercial users, and offering affordable heat for domestic users
Lower emissions to the environment, in particular of CO2
An opportunity to move towards more decentralised forms of electricity generation, and to improve local and general security of supply

Cogeneration is an established technology. Its ability to provide a reliable and cost-effective supply of energy has been proven. Cogeneration is currently used on many thousands of sites throughout the EU, and supplied around 10% of both the electricity generated and heat demand in the EU-15 in 1999. The EU target is to reach 18% by 2010. The following table illustrates what this target could achieve in terms of CO2 emissions reduction. The results are different depending on the fuel being displaced:

There are four broad categories of cogeneration application:

In the last 15 years, significant technological progress has been made to enable engine and turbine technology to be widely implemented and promote more decentralised forms of cogeneration and power generation. Cost-effectiveness and decreasing emissions have resulted. There are an increasing number of varied applications in industry and residential areas and which can be used in heating and cooling applications.

New developments are bringing new technologies towards the market. It is expected that fuel cells, stirling engine and micro-turbines will become economically available from in the next decade.

* Highest heat:power ratios for these systems are achieved with supplementary firing.
Source: COGEN

For more information about cogeneration:

COGEN The European Association for the Promotion of Cogeneration http://www.cogeneurope.eu/