Co-combustion is the burning of more than one fuel to produce power.  The process is also known as co-firing or co-utilisation. This section is devoted to biomass co-combustion, which is an accepted and viable use of biomass that can applied in existing power stations infrastructure where one combusts a fraction (3 to 20% of total fuel weight or energy) of biomass in a coal or gas fired power station.  Biomass co-firing ensures renewable energy generation with limited capital cost, taking advantage of the high electrical efficiency of existing coal and gas power stations. In today’s political climate, concerns over carbon emissions (among others) created the opportunity to replace up to 20% of the coal fuel with biomass.  This represents a substantial volume of avoided CO2 emissions.  The CO2 sequestration performed during the plant’s growing phase creates a neutral CO2 balance.  In addition biomass contains fewer traces of sulphur or metal compounds than coal and due to special interactions between biomass and coal during combustion SO2 emissions are further avoided, further legitimizing it’s use for co-firing.

Part of the recipe for success is sourcing the biomass locally. Today, most co-combustion plants import large quantities of biomass waste and fuel often from abroad, e.g. pellets from Canada and olive residues from Mediterranean countries; or domestically – such as pellets, pallets, wood chips, wood dust, chipboard, and sewage sludge.

1.1  Pre-mixing
When the proportion of biofuel is rather low, it can be fed together with coal to the coal mills and then burned together in the burners. In principle, this is the simplest option and involves the lowest investment. As expected, this technology also carries the highest risk of malfunction of fuel feeding systems. Premixing is associated with direct co-firing.

1.2  Joint direct injection
The second option involves separate handling, metering and comminution of the biofuel and injection into the pulverized fuel upstream of the burners or directly in the burner. This option requires the installation of a number of biofuel transport pipes across the boiler front, which may already be congested. It may also prove to be more difficult to control and to maintain the burner operating characteristics over the normal boiler load curve.  Direct injection is associated with direct co-firing.

1.3  Separate Burning of biomass and coal
The third option involves the separate handling and comminution of the biofuel with combustion in a number of dedicated burners. This approach represents the highest capital cost option, but involves the lowest risk to boiler operation.  This method is associated with in-direct co-firing or parallel co-firing.

1.4  Reburn of biomass in upper furnace
The final option involves the use of biofuel as a reburn fuel for NOx emissions control, i.e. the combustion of biofuel is a specially-designed reburn system located in the upper furnace. This system is still in the development stage, although some small-scale tests have been carried out.  This method is associated with direct or indirect co-firing.

There are three different combustion method types which are listed below.

Direct co-firing is the less costly, most straightforward and commonly applied approach. The biomass is directly fed to the boiler furnace after being passed through the same mills – crushers, bunkers and pulverisers – as the coal.   The biomass can be mixed with the coal in the fuel yard or can be fed to the combustion chamber separately.  Multi-fuel fluidised bed boilers achieve over 90% efficiency, while flue gas emissions are lower than for conventional grate combustion due to lower combustion temperatures.

Biomass is first gasified and the fuel gas is then co-fired in the main boiler. Sometimes the gas has to be cooled and cleaned, which is more challenging and implies higher operational costs. However, this approach offers a high degree of fuel flexibility.  This system has been applied in a few stations, for example, Zeltweg plant in Austria, the Lahti plant in Finland and the AMER-8 plant in the Netherlands.  Since the gasification takes place separately, the ash from coal and biomass are kept apart.  A wider variety of biomass fuels can be used as the potential problems from different biomass such as differing chemical composition and physical properties are dealt with before the gas fuel enters the main combustion chamber, thus boiler efficiency is maintained. 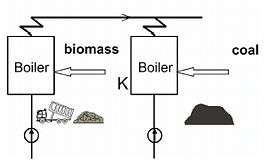 The biomass is burnt in a separate boiler for steam generation. The steam is used in a power plant together with the main fuel.  Parallel co-firing is most popular in the pulp and paper industries as dedicated biomass boilers are used for bark and waste wood.  These industries economize and increase their energy efficiency by using the bio-residues and by-products from their main focus, the production of paper. 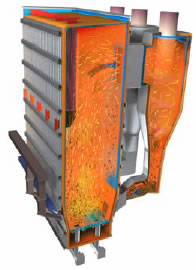 The technology is based around a fluidised movement of fuel and air.  It is an established commercial technology for coal co-combustion plants.  The combustion chamber has a bed, usually made of sand that creates a medium to maintain high combustion temperatures despite possible impurities, low energy content or high moisture contents of the injected fuel.  The technology is therefore suitable for a variety of fuel qualities and moistures, for example wood and other biomass types.  Within the chamber, 90% of the bed is sand and ash, the rest is fuel.  Emissions are considerably lower than grate combusters, for example SO2 and NOx.  Little investment is required to change to biomass operation.  The AFBC has several varieties: Circulated, Bubbling and Stationary fluidized bed boilers are the most common types of this technology.

The principles are exactly the same as the AFBC except that the combustion takes place at higher than atmospheric pressure.  Therefore, there is the problem of crossing the biomass fuel across the pressure boundary into the reactor. 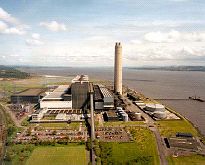 This technology depends on pre-processing the fuel, whether coal or biomass, into fine material (generally <1mm) ready for injection into the burner.  The choice of fuel is more restricted, however it is still the most widely used technology in the world for power generation for utilities. The reduced emissions are one reason for choosing this technology but the low energy density means a higher volume flow to the boiler and a high volume of locally available biomass.  The Longannet Coal fired power station in Scotland, UK, is now co-firing with biomass (sewage sludge) – see opposite.  There are a number of ways to employ biomass for power generation with this technology:

Fuel is directly combusted over a grate with no further processes or circulation of air.  It is the simplest and oldest design for combustion of solid fuels.  However, it is the least efficient and has high flue gas emissions.  Chamber combustion temperatures are higher than for other technologies and range from 800 to 1400 C.  Wood fuels can be used in the grate combustor quite unproblematically but for other biomass types, it is generally sensitive to changes in fuel quality and moisture.  Some experiences have shown that recycled fuels in small plants are relatively safe in terms of emission levels but in other cases there has been ignition and poor combustion problems related to biomass fueling.