Pyrolysis is a process for thermal conversion of solid fuels in the complete absence of oxidizing agent (air/oxygen), or with such limited supply that gasification does not occur to any appreciable extent. Commercial applications are either focused on the production of charcoal or production of a liquid product, the bio-oil. The latter is potentially interesting as a substitute for fuel oil and as a feedstock for production of synthetic gasoline or diesel fuel.

During pyrolysis, which takes place at temperatures in the range 400-800°C, most of the cellulose and hemicellulose and part of the lignin will disintegrate to form smaller and lighter molecules which are gases at the pyrolysis temperature. As theses gases cool, some of the vapours condense to form a liquid, which is the bio-oil. The remaining part of the biomass, mainly parts of the lignin, is left as a solid i.e. the charcoal. To some extent, it is possible to influence the product mix so that either gases, condensable vapours or the solid charcoal is promoted. Pyrolysis product distribution as a function of heating rate, residence time and maximum reaction temperature. 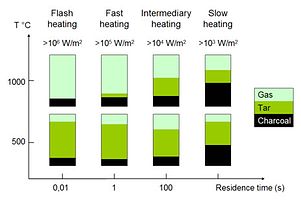 Fast pyrolysis is an advanced process which gives a yield of bio-fuels up to 80% on dry feed, typically, 65% liquids and 10% non-condensable gases. The characteristic features of fast pyrolysis are the very high heating and heat transfer rates, a carefully controlled pyrolysis temperature and a rapid cooling of the products. The residence time at the pyrolysis temperature must be very short, typically less than one second. Low temperatures (up to about 650°C) maximize the yield of condensable vapours, and about 70% of the biomass weight can be obtained as a liquid. High temperatures (above 700°C) maximize gas yields, about 80% of the biomass can be converted to a combustible gas with this process.

Technically, the pyrolysis process and specifically the supply of heat may be carried out in three quite different ways:

Until now, pyrolysis of biomass has been used for the production of charcoal for industrial or household markets. Bio-oil has so far only been commercialized for production of food additives. The bio-oil could also be used for the extraction of other special chemicals and that the bio-oil as such could find a market as a substitute for petroleum products. However, the bio-oil has some properties that triggers additional costs. It is acidic and corrosive which means that more expensive materials must be used in the burner nozzles and the entire fuel system. The bio-oil calorific value (typically ranging 17-20 GJ/ton) is lower than fuel oil (approx. 40 GJ/ton) which leads to increased costs for transportation and storage. The viscosity of the oil increases during storage, therefore turnover in storage should be shorter than few months. Whether or not the bio-oil is competitive with petroleum fuel oil depends on the feedstock costs and local fossil fuel oil prices. 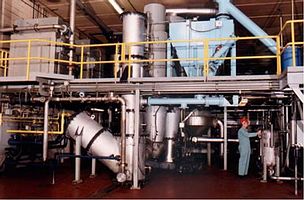 Due to the small number and limited scale of existing pyrolysis oil production units, the economics of a commercial scale unit can only be estimated. Costs of bio-oil production depend on feedstock (pre-treatment) costs, plant scale, type of technology etc. Studies indicate that pyrolysis oils can be produced for between 75 and 300 EUR per ton oil (4 to 18 EUR/GJ), assuming feedstock costs between 0 and 100 euros/t (0 to 1.9 EUR/GJ).

Although fast pyrolysis technologies for the production of liquid fuel have been successfully demonstrated on a small scale, and several large pilot plants or demonstration projects are in operation or at an advanced stage of construction, they are still relatively expensive compared with fossil-based energy, and thus face economic and other non-technical barriers when trying to penetrate the energy markets. As with biomass gasification, fast pyrolysis will only be able to penetrate energy markets if completely integrated into a biomass system. The R&D needs for flash pyrolysis remain the reliability of the processes under development as well as the quality, and utilisation of the bio-oil. Cost-effectiveness all over the process is also a key R&D preoccupation. However, bio-oil production can also be considered as means of biomass pretreatment for transportation purposes over long distances from several production facilities supplying very large biorefinery facilities or facilities for the production of synthetic biofuels. 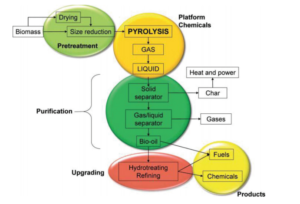 A mixture of a complex feedstock and multiphase products make it difficult to study the exact mechanism of pyrolysis, but there is a general understanding. Initially upon heating, water is removed, resulting in a dry fuel that undergoes primary pyrolysis. Decomposition occurs upon the transfer of heat from the surrounding area to the biomass particles resulting in solid char, bio-oil, gas and water, constituting the primary stage of pyrolysis. An increased surface area results in better heat transfer, which causes a faster and more complete reaction. For this reason, biomass is typically mechanically ground into a fine powder prior to
the reaction. During the secondary stage, further decomposition occurs in addition to various other reactions resulting in an increase in gaseous products. Fast pyrolysis can have a biomass to bio-oil conversion of 70–80%. Liquid yield can be maximized by a fast residence time, preventing the secondary decomposition of products.

Pyrolysis results in a wide range of products that can be divided into the categories of solid char, liquids (water and bio-oil) and gases. Char is the term used for all of the solid products including organic matter (high carbon content) and ash. Water is produced as a product of pyrolysis as well as during the initial drying stage via evaporation. The bio-oil component is a brown, polar liquid comprised of a mix of oxygenated compounds, which differs with feedstock and reaction conditions. At moderate temperatures, gas products are mainly comprised of CO, CO2and CH4 with H2 and CXHY gases also being produced at higher temperatures (Catalytic Biomass Valorization).